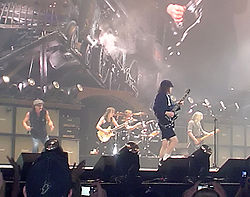 AC/DC are an Australian Rock Band formed in 1973 by brothers Malcom and Angus Young. Although the band are commonly classified as Hard Rock and are considered a pioneer of heavy metal, they have always classified their music as Rock n´Roll.
AC/DC underwent several line-up changes before releasing their first album, High Voltage, in 1975. Membership remained stable until bassist Mark Evans was replaced by Cliff Williams in 1977 for the album Powerage. The band recorded their highly successful album Highway to Hell in 1979. Lead singer and co-songwriter Bon Scott died on 19 February 1980, after a night of heavy alcohol consumption. The group briefly considered disbanding, but soon ex-Geordie singer Brian Johnson was selected to replace Scott. Later that year, the band released their best-selling album, Back in Black.

AC/DC - Back In Black

AC/DC - For Those About To Rock We Salute You

AC/DC - You Shock Me All Night Long