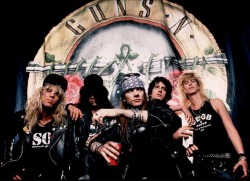 The band has sold an estimated 100 million albums worldwide, including over 46 million in the United States. The band's 1987 major label debut album Appetite for Destruction has sold in excess of 28 million copies worldwide and reached number one on the United States Billboard 200. In addition, the album charted three Top 10 hits on the Billboard Hot 100, including "Sweet Child o' Mine" which reached number one. The 1991 albums Use Your Illusion I and Use Your Illusion II debuted on the two highest spots on the Billboard 200 and have sold a combined 14 million copies in the United States alone and 35 million worldwide. After over a decade of work, the band released their follow-up album, Chinese Democracy, in 2008.

Their mid-to-late eighties and early nineties years have been described by individuals in the music industry as the period in which "they brought forth a hedonistic rebelliousness and revived the punk attitude-driven hard rock scene, reminiscent of the early Rolling Stones."

Guns n´Roses - Welcome to the Jungle

Guns n´Roses - You Could Be Mine