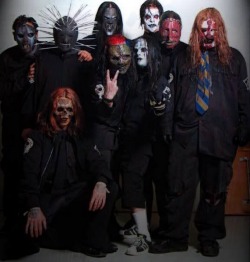 Slipknot formed in 1995 and underwent several line-up changes following the independent release of their first demo Mate. Feed. Kill. Repeat. in 1996. That album featured original lead vocalist, Anders Colsefini. Their self-titled, major label debut, Slipknot, was released in 1999, featuring permanent new lead vocalist, Corey Taylor, and was followed by Iowa in 2001 and Vol. 3: (The Subliminal Verses) in 2004. On August 25, 2008, the band returned to release their fourth studio album, All Hope Is Gone, which debuted at the top spot on the Billboard 200 charts. The band has released three DVDs, including Disasterpieces, which was certified quadruple-platinum in the United States.

Slipknot - Before I Forget

Slipknot - Pulse of The Maggots